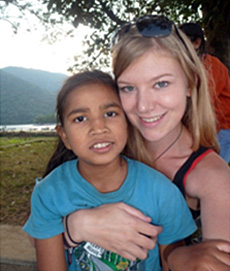 Right after I finished school, I wanted to take a gap year and do some volunteer work in Nepal. I didn’t go with an organization but found the
NCH on the internet. The homepage appeared to be very pleasant and I wrote to the organization team to plan it. The NCH crew managed everything very well.

In September 2012 I arrived at Kathmandu Airport. As they organized I was picked up in time,and brought to a hotel. On the next day I took the bus to Pokhara, a very bumpy ride, but with a great view over the landscape.

In Pokhara I was picked up and brought to the Himalayan guesthouse, a beautiful place with a great garden and restaurant. There. I shared a clean and nice room with another volunteer. It was a very warm welcome and I felt home directly.
Many other volunteers also simplified the access to the NCH family. The NCH team also organized a side seeing tour in and around Pokhara for all volunteers. We got our breakfast and dinner at the guesthouse and their restaurant, two days a week we had dinner at the Chilly Bar, one of Pokhara’s best rated restaurants.

After a 3 Day class in Nepal culture and Language which was a lot of fun and very useful I started my daily life in the NCH. On my first day in the orphanage I was welcomed, the children were open minded, they asked after my name, origin, etc. and I felt so welcome.

Normally the other volunteers and me arrived around 8 am at the orphanage. First we helped the younger children to get dressed, then we accompanied them to the school, a short walk through fields, sometimes with a great view over the Himalaya. Then we helped in the house, cleaned the floors or tided up the rooms.

For Lunch we could eat in the orphanage or went in one of the numerous restaurants in Pokhara.
Before the Children came back from school we helped preparing the food, like cutting potatoes and other vegetables. When the Kids came back they had lunch, and after that some free play time. Studying and homework was next and we often helped them doing it.

We had two days off a week, which we used for cleaning the clothes, hanging around at the lake restaurants, buying souvenirs and enjoying the “Easy going “life in Pokhara. Some other volunteers and I also took a week off for the ABC trek, which was absolutely amazing.

By the time the kids had holidays, we did a lot of activities in and around pokhara, included a Momo party, cinema, and a soccer game for Children, stuff and volunteers.
We always had the possibility to bring some ideas on, we organized the first “open house day” were we tried to get a lot of tourists to watch the house and sell stuff from the women empowerment.

I stayed for Christmas, the first I didn’t celebrated with my family at home, but It was a wonderful time to do it with all the children, stuff and the other volunteers and we all had a great time during the holiday.

To leave the NCH after three months was very emotional. The farewell was very heartily and warm. In enjoyed the time so much. The children are absolutely amazing, it was great to meet so many other volunteers from all over the world, and we always had a lot of fun. I am very thankful to had the opportunity to spend my time with all this wonderful people and I m sure I will come back one day.